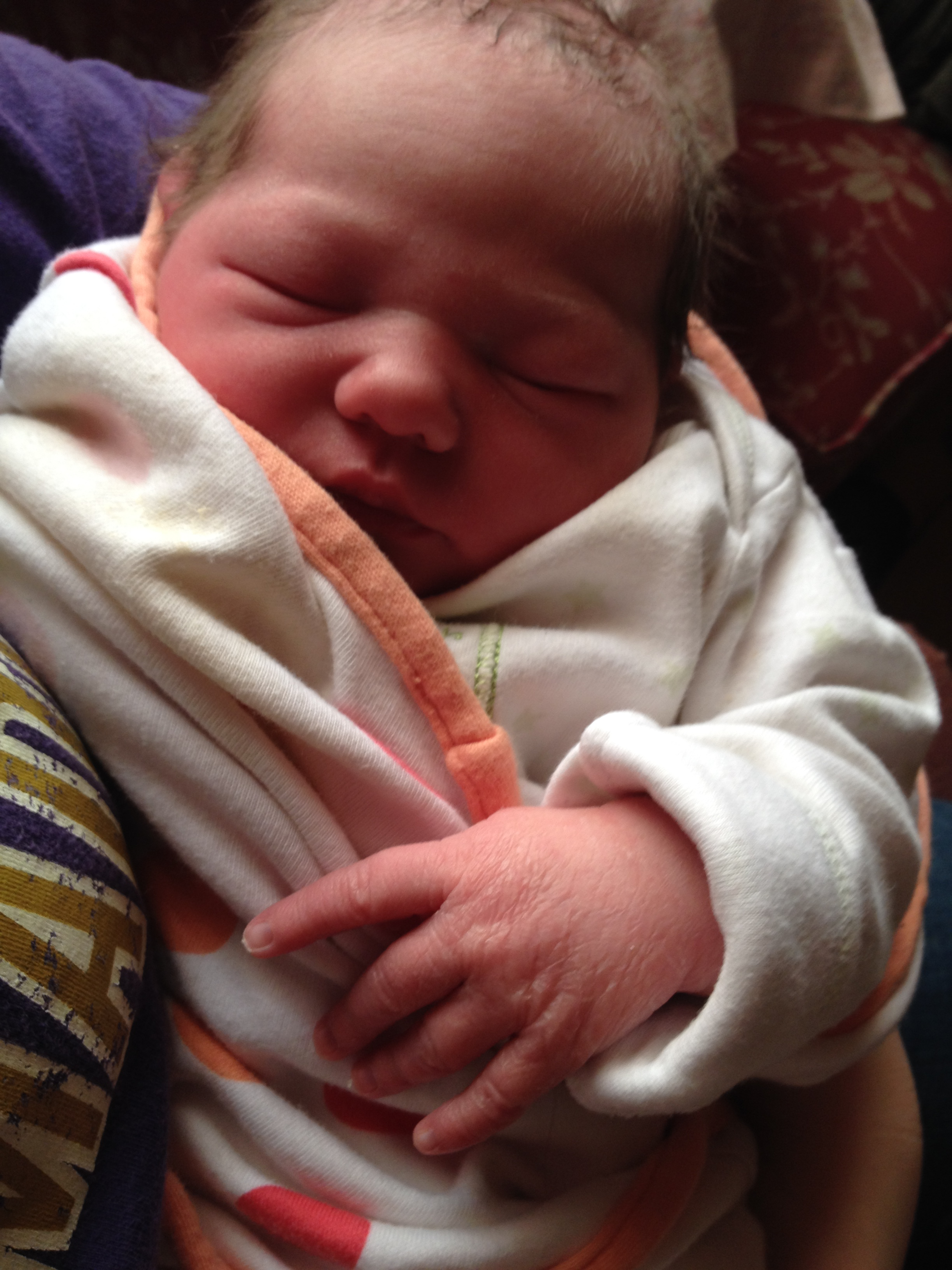 I feel like I knew her before she was born. Maybe it’s a sixth mom-sense from having carried more than a few children to term, or maybe a God-given vision of what she would be like, but I had imagined a hundred times what she would look like, and what her temperament would be like, and her name. The moment she was born she was all of those things I had imagined. There was her name, that more than anything would have only fit one baby. I had imagined that baby with that name so many times, that had she looked different than I imagined, or if her birth had strayed from what I envisioned, it wouldn’t have worked. I was afraid to tell people her name, for fear they wouldn’t like it, and they wouldn’t know it was already hers. Maeve Avonlea. Who’s even heard such a name? The moment I laid eyes on “Maeve” on some website, I knew it fit her, and the much beloved “Avonlea” got bumped to the middle, where it inadvertently made her name start with my mom’s middle name and end with mine. I didn’t even know this until my mom mentioned it. I knew my mom’s middle name was included, but hadn’t thought of mine at all, or of their unique placement. Her story is beautiful, and in spite of her placement as tenth child, her story deserves to be told. What I think people fail to realize is that tenth is as important as first to us. In fact, we grab hold of each moment tighter and hold it as long as we can, because we realize the brevity of these first moments. They fly past, and you really do have a twenty year old before you know it. So I stare at her long and hard, and cuddle her more often, and she gets more attention than the first ones did, and instead of regretting that, I let it make me a better mom.

My pregnancy was easy with her. It flew by while I ran here and there with and for the other nine kids. I ate a very healthy diet, ditching sugar and drinking tons of healthy stuff, and it paid off in huge ways.

I didn’t swell up, and my blood pressure was fine, and my blood sugar stayed level. It was amazing. Near the end, I expected the usual weeks of pre-labor that had defined the end of my other pregnancies. For those, I had experienced tons of nausea, contractions, and anxiety for at least two weeks before the baby was born, so when those kicked into high gear on Monday the 23rd, her due date, I assumed it might be another two weeks before she was born. I had felt so amazing up to that point, so I assumed as the evening wore on, the contractions would stop. When they reached four minutes apart, though, I contacted the midwives, and they came out and set up shop, helping to create an expectant atmosphere, and not judging as the contractions slowed near midnight. These didn’t go away, though, and although the midwives left to rest, and I was able to sleep between them, I was still awakened through the night periodically with contractions. I didn’t time them, but it seemed like once or twice an hour for the following day I would experience a fairly unremarkable contraction.

My mom stayed the night and helped take care of me that day while I tried to keep my mind off the fact that I could be in labor by doing things like playing games and talking about other things. Toward the evening, the contractions went back to ten minutes apart, and got stronger and harder to ignore. We joked that if we denied the fact I was in labor, I might continue to progress, so I swept and rinsed dishes, and whistled whenever a contraction would stop me from continuing. My girls would giggle when I whistled and the atmosphere was light and playful and just the right amount of quiet. At around 8:30, we decided to move upstairs to my bedroom and watch a show before bed. I still fully expected the contractions to stop again, so I refused to time or acknowledge them, and we settled in to watch TV. I found myself distracted and uncomfortable sitting, and although the contractions weren’t painful, they demanded attention, and I didn’t see most of the show. Everyone else watched and I climbed up and down out of the bed, walked around, and pondered what was happening. At one point, I remember my husband watching quietly, and I gave him my despairing look, the one that means, “Im not ready for this” and he started asking if I should call the midwives. We all talked and decided that I would know for sure this time before I called. We knew there would come a time of no turning back, and we felt sure I would know when that was. I tried to lay down, and immediately felt uncomfortable and super anxious. This was totally different than the night before, when I had felt a peace about resting. I decided to take a shower, because I was feeling a rising anxiety, and I knew the shower might be the defining moment for whether these contractions would stay or go.

I think they were probably about five minutes apart at this point. In the shower, I had a conversation with the Lord. When a contraction came, I started to feel a rising panic and I asked for strength. I had a sense that the Lord was asking what

I wanted to happen, and I acknowledged that what I really wanted was to meet my little girl. In the midst of the contraction, the Lord reminded me that he had asked me to trust Him with my beach vacation, and that I had agreed to release that experience to Him, regardless of the fact that I had insisted that would be my first priority this year. When I had turned that over to him, He had replaced my stubbornness with peace. In my mind, I clearly saw the beach as the contraction grew and passed, and an incredible peace accompanied that vision. It was as if God was giving me the resources I needed to weather the contractions with His peace. I made the decision to trust Him with this, and to surrender to this experience instead of fighting the inevitable hard work that would accompany it. I dressed and told my family that we would time three contractions and if they were closer and more intense, that we should call the midwife. I had texted her before the shower, just so she would have a head’s up, so I knew she was aware we might call.

Each contraction that came was super intense, but wasn’t accompanied by any pain, and the strongest ones were accompanied by the scene of the beach I’d seen shown in the shower. I was a different woman than I usually am in labor. Between contractions, we would joke and there was a palpable peace. At some point, I started saying, “Let’s call the midwife,” but everyone was busy talking or timing or setting up the room, so I weathered the next few contractions before I grabbed my husband and insisted he call now. Another couple of minutes passed while we tried to figure out which number he should call on his phone since mine was being used to time, and when he finally called, he reached her husband instead of her. Thankfully, they were together, and my husband’s message for her to come now made it through. Looking back, it seems so silly that I insisted he use his phone, but I wanted my daughter to time contractions, and it seemed so important at the time that she continue to use the app on my phone to do so. They had reached less than a couple of minutes apart and were lasting almost a minute each, but still were not painful. It was shocking! Only once before have I experienced that with my contractions, and that birth happened in a car! When the midwives arrived, they were warmly welcomed into our tranquil scene, and I think could tell right away that things were different this night. I moved back and forth trying to find that perfect spot to labor in. My husband and I had set up a little stool in front of a love seat in our room, and I loved sitting there and leaning against him during contractions. I was so completely relaxed that I didn’t fear pain or progression the way I had in the past. God’s peace had completely replaced my fear. It was like the Bible verse Isaiah 26:3 certainly rang true:

You keep him in perfect peace

whose mind is stayed on you,

because he trusts in you.

I really can’t imagine a more perfect peace than I felt while in transition. When the midwife recognized that it was time to push, I remember a feeling of wonder, and saying something to her like, “It can’t be time to push, I haven’t even hit active labor yet.” She just gave me a knowing look. My older daughters who were in the room as I labored had to tell me that I was working hard, because as a contraction would end, I would feel relaxed and peaceful, and I commented that I must not be in labor because I didn’t feel like I was working hard. Things shifted quite a bit when it was time to push and the baby didn’t immediately emerge like I’m used to, but I was still able to laugh at someone’s joke. For the last 8 of my children, I had only needed to push a couple of times to be rewarded with a squirming little one, but this time, I could tell there was little to no downward progress when I would give it all I had. I began to move back and forth from the love seat to the toilet, and when I would be on the toilet, the contractions would be extraordinarily powerful and require a great deal of energy. On the love seat, they would dwindle and be much more comfortable, which is no way to get a baby here! Finally, at the midwife’s urging, I spent some more time on the toilet and was able to feel the downward progress of the baby. When the head was close to crowning, I was urged to move back to the now prepared love seat, where I perched on the edge and managed with several more difficult pushes to welcome our newest little one earthside. She came a half an hour into a brand new day, her birth the culmination of years of wrestling through trust issues and learning to surrender my will. Key to this experience was my relationship with my midwife, a good friend who has seen me through more life experiences than just several births. I know she knows me in ways that allow me to trust her like a woman needs to trust her caregiver. Oh, and Maeve’s name fits perfectly.